The Winners of the John Dearie Trophy for 2018 were the “Old Codgers” aka Stevie Mitchell and Donnie MacKinnon.

The Quiz was held as part of The John Dearie End of Training Dinner at Dalziel Park Hotel and was fiercely contested among the 47 members attending but the “Old Codgers” had to much knowledge for the young ones.

John gave his usual hilarious monologue with thanks to the Association for organising the event and commented on the large numbers in attendance. 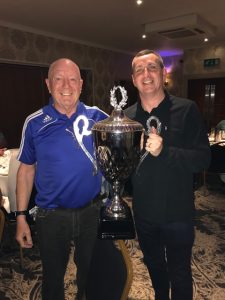